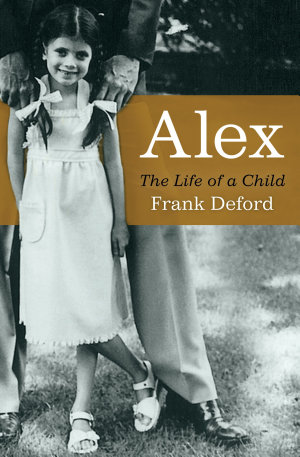 A father’s moving memoir of cystic fibrosis “captures a brave child’s legacy as well as the continuing fight against the genetic disease” (The New York Times). In 1971 a girl named Alex was born with cystic fibrosis, a degenerative genetic lung disease. Although health-care innovations have improved the life span of CF patients tremendously over the last four decades, the illness remains fatal. Given only two years to live by her doctors, the imaginative, excitable, and curious little girl battled through painful and frustrating physical-therapy sessions twice daily, as well as regular hospitalizations, bringing joy to the lives of everyone she touched. Despite her setbacks, brave Alex was determined to live life like a typical girl—going to school, playing with her friends, traveling with her family. Ultimately, however, she succumbed to the disease in 1980 at the age of eight. Award-winning author Frank Deford, celebrated primarily as a sportswriter, was also a budding novelist and biographer at the time of his daughter’s birth. Deford kept a journal of Alex’s courageous stand against the disease, documenting his family’s struggle to cope with and celebrate the daily fight she faced. This book is the result of that journal. Alex relives the events of those eight years: moments as heartwarming as when Alex recorded herself saying “I love you” so her brother could listen to her whenever he wanted, and as heartrending as the young girl’s tragic, dawning realization of her own very tenuous mortality, and her parents’ difficulty in trying to explain why. Though Alex is a sad story, it is also one of hope; her greatest wish was that someday a cure would be found. Deford has written a phenomenal memoir about an extraordinary little girl.